After a wait of nearly 4 years, The St Pierre Snake Invasion release their second album Caprice Enchanté on 21st June. The band’s name comes from the fact St Pierre is a town where everything that could go wrong did, and with this album that sentiment was certainly present throughout.

Recorded at Rockfield studios in January 2017 by Sean Genockey (Reuben/Shame/The Who/Jamie Lenman), the creation of Caprice Enchanté itself proved incredibly difficult and required at least 4 – 5 additional sessions at Black dog studios in London over the course of 6- 8 months. They had to work with a producer in demand and his ever increasingly busy diary (from band vocalist Damien Sayell – “Sean was commissioned to record the new Shame album, shortly after that the new Roger Daltrey album and then again soon after the new album by The Who, which meant further delays in being able to finish the album”), damaged vocal chords (“On the 1st day of vocal recording I blew my voice on the 1st song of a three day session”), disagreements over final mixes (“the mixing of the album proved to be difficult as well and took months and months of us nit-picking to finally get to the point where we were happy.”) and an original member leaving the band (“bassist Dave Larkin left the band shortly after completion of the album two years from beginning the process.”). 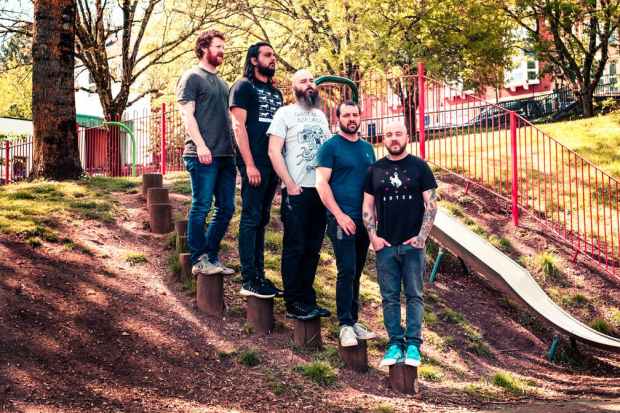 The ambitions are incredibly high on Caprice Enchante though, despite the delays and difficulties in its creation, as Damien explains – “The album was written over the course of 2-3 years and began with the intention of being a critique of my romanticisation of music, and how felt to be an ageing musician who hadn’t achieved the bedroom aspirations of my teenage years. As the writing progressed the theme gradually became more about ego, self-entitlement, defeatism and identity, or more so a sense of a losing your identity.”

It all goes towards the endearing quality of the album and it’s hard not to fall in love from the outset. It’s raw, gritty, humorous, heavy and often chaotic. Whether it be the riotous ‘Braindead’ which talks of right-wing politics and its rhetoric of deception or the sprawling and lurching ‘Carroll A Deering’ it is an album that packs an immediate and insatiable punch. Blending the cacophony with instantaneousness and spikey riffs is the order of the day and it works brilliantly.

For a 45 minute album with all its recording difficulties it’s quite the feat that there’s not a single weak track here. 13 tracks of pure gold, the title track, ‘Omens’, ‘Pierre Brassau’ and the Depression and masculinity of ‘Things to do in Denbigh When You’re Dead’ are particular highlights.