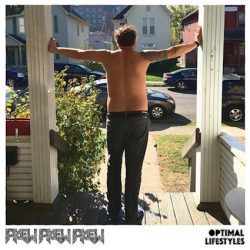 Toronto punks Pkew Pkew Pkew release their new album Optimal Lifestyles on 1st March via Big Scary Monsters (UK) and Dine Alone Records (US/Canada). While Pkew Pkew Pkew’s 2016 self-titled debut angled more towards the minutiae of the late-20s punk life, Optimal Lifestyles catalogues and reflects on the root causes of the band’s previous fun-loving, hard-partying behaviour with unflinching clarity and precision. Front man Mike Warne writes songs in the same tongue as plot-driven realists like The Hold Steady’s Craig Finn, who went to Toronto to workshop songs with the band for the record.

“Is this good or is this bad?” ponders Warne of the lifestyle Pkew sings about. “It’s fun to live like an idiot, but it’s probably bad, also. We’re all constantly wondering if we’ve ruined our lives forever or not, being in a band.”

The album plays out like a diary of the band, distilling their thoughts and feelings to life. It deals with the issues, getting towards acceptance – it might get fucked up but it’s worth a shot.

Musically this feels like a version of country men Pup mixed with the indie rock feel of Japandroids and The Strokes. It’s spikey and immediate, yet there’s something vital missing. It’s a decent album but one which is ultimately pretty forgettable.

For an album that contains 15 tracks its more than a little damning that only one or two stand-out. ‘I Don’t Matter At All’ and ’65 Nickels’ are enjoyable tracks – the punk attitude and speed give them a urgency that the others lack and as such are the only two that stick in the mind.

Overall, you’ll most likely enjoy Optimal Lifestyles but you won’t be rushing back for repeated listens.