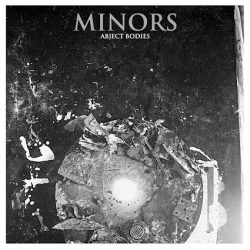 Canadian hardcore act Minors release their second album Abject Bodies on 22nd February via Holy Roar Records (UK/EU), Deathwish (US/CAN). The band are determined to take the listener as far as they can, on their trip into the most oppressing and dismal place the mind can conjure.

It is an album full of a caustic sea of feedback and grinding noise, reminiscent of the best experimental noise, sludge, and hardcore. Since the release of the band’s debut release in 2017 (Atrophy), Minors have spent their time touring their native Canada, finding themselves sharing stages with the most familiar names in modern sludge and hardcore, including Primitive Man, Spectral Voice and Homewrecker.

It’s an album that never lets up, it’s a bleak a d devasting blast of vicious hardcore. An undeniably exhilarating 30 minutes, it assaults the senses in the most pleasurable way. There are bands that flirt with hardcore, serving up a watered-down version, Minors do anything but that. This is pure hardcore – raw, impassioned, dark and devasting.

Just stick it on and revel in the brutality. In all honesty we probably couldn’t do its prowess justice in this review, it needs to be heard to be believed. To get a glimpse, your go to track should be ‘Flesh Prison’