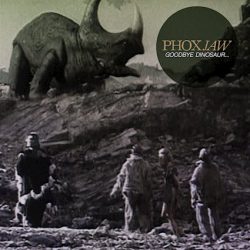 Bristol rock outfit Phoxjaw release their debut EP Goodbye Dinosaur on 16th November. There’s been comparisons to At The Drive-In and Cave In, owing to their melodic tenacity and driving riffs, mixed with their ferocious energy on stage. It builds the band up, and on this debut, they deliver on the melody and riffs without coming close to the aforementioned bands.

It’s a solid statement of intent, albeit a little tame. As rock releases go, this stays firmly within the mould, apart from the thunderous and triumphant ‘Dinosaur Bones’ it isn’t a release that will stay with you. That’s not to say it isn’t decent. It’s obvious there’s a lot of talent at the heart of Phoxjaw.

‘Weapons’ has the basis for a brilliant track, and it comes close to it but to lack a little coherence and structure. Scratch the surface of ‘Triceratops’ and ‘Plastic Wedding’ and you’ll get the sense that the band are on the edge of something special. It just need honed and focused a little more.