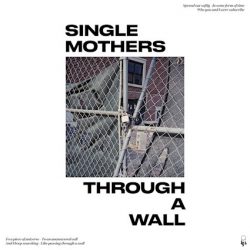 Gone is the poppier sides of Thomson’s songwriting heard in 2017’s Our Pleasure. This is all blistering riffs; breakneck tempo shifts and breakdowns. Thomson’s lyrics remain as candid as always, while infused with introspection from a newfound form of clarity in his personal life. “This was definitely the hardest album I’ve ever written lyrically, but also the quickest,” he explains. “It’s the first Single Mothers record I’ve made since getting sober and not having booze as a crutch to lean on for inspiration. I feel like I’ve hit a turning point in my life, so it’s a lot more of a personal album.”

There’s a real punk feel to the album, its mostly frantic, short sharp bursts laced with tonnes of attitude and loathing. With 14 tracks clocking in at just over 33 minutes there’s no time for the grandiose – just simple frenzied post-hardcore.

Overall, it’s a decent album with ‘Stoic Pointless’ and ‘Across The Couch’ being the standout tracks. The aggression at the core of Thomson’s vocal plays the perfect partner to the spikey and ferocious riffs. ‘Big Scar’ has some excellent guitar work and the opening riffs of ‘Tan Line’ are brilliant, the breakdown is equally as good too. Unfortunately, much of the rest of the album doesn’t leave much of an impression.

Sure, they’re decent post-hardcore tracks and are enjoyable at the time of listening, they just don’t sucker you in and you mightn’t be in a rush to listen again. That said there are moments within tracks that are worthy of praise, the breakdown in ‘Signs’ begs you to throw yourself around and the social commentary of ‘Dog Parks’ resonates with its truths.

1 Comment on Album Review: Through A Wall by Single Mothers