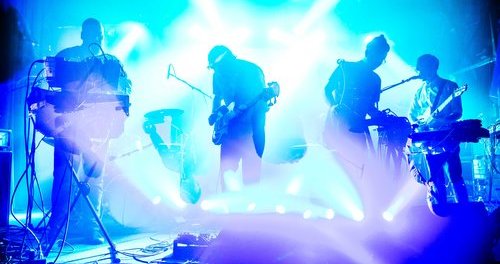 We’re pleased to bring you an exclusive premier of the new King Who track ‘New Balloons’ from their forthcoming album Giant Eye. The album will be available on 180-gram LP and download on August 17th, 2018 via SELF Group. Pre-order here. Listen below:

King Who refines its sound on a dreamy sophomore release, Giant Eye, both rounding edges and expanding landscapes. New wave, post-punk, and dream pop rhythms seep through this bass heavy record. The vaguely dystopian lyrics and toe-tapping bite swim in echoing waves, wallowing in the reverb currents. The intoxicating 8-song album is packed with beautiful, soaring melodies and powerful rhythm-forward tunes, driven by the silky and emotive vocals of frontman Michael Young.

Giant Eye was produced by Hutch Harris of The Thermals and recorded by Victor Nash at Destination: Universe! King Who joined the growing SELF Group label roster in 2016, releasing their debut Us Lights on LP and download in March of that year (full album stream).