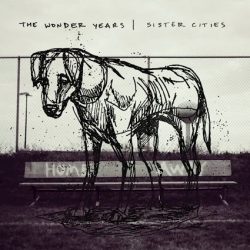 They’ve gone from being pop punk (on 2010s The Upsides) to emo tinged pop punk on Suburbia I’ve Given You Everything… (2011) to triumphant emotional punk rock on 2013s Greatest Generation to more adult orientated punk rock on No Closer To Heaven (2015). Sister Cities continues the development with it coming over as their strongest, most confident album to date.

We’ll make no bones about it, we’re huge fans of The Wonder Years and Sister Cities has only strengthened our affinity with the band. Where previous albums were based around love and friendships, this has the feeling of commonality – a message that we’re not all that different and we just give each other a little love we’ll be OK. Just look at the title track and lead single with the lyrics ‘I was lying low, a stray dog in the street, you took me home, we’re sister cities’. vocalist Dan Campbell on the inspiration behind Sister Cities, “It started with journals and photos. We started by documenting. We didn’t know where it would go or if it would go anywhere at all, but we wrote it all down. We took photos of everything. And then when it came to put it altogether, we had this catalogue of how we felt and what it looked like and sounded like and we built from there. Figuring out what the moments were that stayed with me the most. When did I feel most connected to the people around me and why? What did being in this place during this moment teach me? It was a difficult year personally and globally and we experienced that through this lens of being everywhere but home, kind of floating through places and seeing how being there altered our perspective.”

You can’t help but love this album, as soon as ‘Raining In Kyoto’ kicks off it’s like you’re being reunited with a friend, tears will be shed and good times are afoot. ‘Pyramids of Salt’ is a grower, if you aren’t sure at first give it a couple more goes and it will surely become one of your favourites. Both ‘It Must Get Lonely’ and ‘Flowers Where Your Face Should Be’ are a little dark but there’s a positivity under the covers – depending on how you relate to them.

On the punkier moments like ‘Heavens Gate (Sad & Sober)’ and ‘The Ghosts of Right Now’ you hear The Wonders Years doing what they do best. Big, emotional punk rock that connects with the listener and strengthens that strange bond you’ve made with the band on previous albums. The latter of the two is especially strong. Conversely, the quieter moments are also excellent and show just how far the band have come. ‘We Look Like Lightening’ is beautiful while ‘When The Blue Finally Came’ is hauntingly emotional, its so affecting you can almost feel yourself welling up. ‘The Orange Grove’ is the archetypical Wonder Years track, begging you to sing along with Campbell, before ‘The Ocean Grew Hands to Hold Me’ closes thing of in what must be the bands most ambitious and epic track to date. Wonderful stuff