Bearfoot Beware release their new album Sea Magnolia on 16th March via Superstar Destroyer Records. On this album the band abandon much of their crossover punk-meets-math of their early recordings and debut LP for a heavier, simpler sound. “The heavier tunes are where we had the most fun” they say, linking this change in their sound to “a lot of the music that surrounds us down at CHUNK [collective, a space which the band co-founded] and in the Leeds Music Community.”

Lyrically, this aggression is felt as well. “It’s angry but not hateful,” they explain “anger is a tool you can use to express yourself, but hate is a weapon.” In terms of concrete themes, the album title says it all, “[while it] seems silly to sing about the rent cycle that we seem to find ourselves in… moving from one expensive Magnolia coloured box room to the other is a pretty good example of how we can’t seem to take control of our lives in the way we thought we could.” 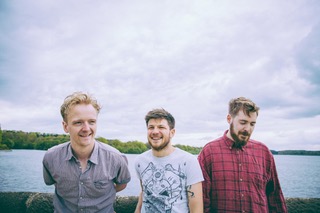 Musically, that anger is distilled into 9 noise rock tracks. Throbbing with aggressive basslines and a general discordance. It’s certainly not an easy listen. As is with most heavy noise rock, it challenges the listener with most of the 30 minutes sounding at odds with each other.

But it works. When the music can boarder on the cacophonic it complements the discourse in the lyrics forming a noisy beast that challenges you in it’s lyrics and makeup. Check in to the closer and title track ‘Sea Magnolia’ for the archetypical style of the album, on first listen it’s as if every element conflicts with each other. Give it another couple of listens an it all comes together.

On the other side of the coin, ‘Check’ is the most accessible track with its throbbing bassline and gradual approach whereas ‘Point Scorer’ is the most immediate and forthright track letting the heavy riffs and urgency do the talking. Elsewhere, Sea Magnolia, has some great tracks ‘Knot In The Rope’ throbs with anger while ‘Punk Is Violence’ revels in angular riffs and urgency.

An invigorating listen that challenges you in several ways.