Cassels release their debut album Epithet on 6th October via Big Scary Monsters. For Cassels, music is about authenticity. Together they embody the spirit of punk, even if their sound stretches the boundaries of any genre. It is rare to find a band who sound only like themselves, especially one with just two instruments, but Cassels are just that. The work of two brothers, Loz and Jim Beck, they have been playing music together since long before their voices broke and all that practise has paid off – direct and considered lyrically, musically challenging and in possession of an originality you could never force.

While the band may create a deliberately jarring, noisy and edgy sound, it comes out ridiculously infectious. Sure, it mightn’t conform to the traditional view of what should be accessible and enjoyable but it is and it’s an utterly compelling listen. For a duo, it’s a huge sound. That along with the raw energy of Epithet can be (in part) attributed the production work of Rocky Reilly (And So I Watch You From Afar, Adebisi Shank) who captures all the intricacies of the two piece. 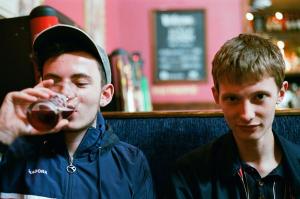 It’s an album that you can’t help but enjoy, the movement from chaos to melody works seamlessly and is the real magic of Cassels. It’s challenging without being a chore. There’s more than a couple of moments where the sound induces nostalgia of post-hardcore from the early 00s. The highlights fall in the stirring ‘Let’ and the call response hooks of ‘You Turn On Utopia’. ‘War’ contains some excellent guitar works and melodies of closer ‘Chewed Up Cheeks’ is pretty darn good too. Hell, the whole album is a highlight!

If the musicianship doesn’t win you over, then perhaps the politicised poetry of the lyrics will do the job. “There’s the old cliché that good lyrics stand up on a page without music, but in reality, I don’t think many read well at all,” Jim says scathingly of mainstream music. “At some point I made the conscious decision to try and write words which could be read in isolation without them being obviously identifiable as being from a song.”

If you don’t get it on first listen, persevere. You’ll be rewarded with an exciting and captivating album.