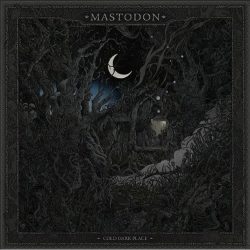 Mastodon release their new EP Cold Dark Places on 22nd September via Reprise Records. It’s a bit of a strange release, with Three of the tracks were recorded during the sessions for 2014’s Once More ‘Round the Sun, while ‘Toe to Toes’ was recorded during the Emperor of Sand sessions in 2017, it’s not exactly new material.

Stranger still because it’s poor by Mastodon standards. It just feels like it’s left over material from the aforementioned albums. Compound that with the fact that the EP simply doesn’t flow, Once More ‘Round the Sun and Emperor of Sand were two different sounding albums with the latter having more of an accessible pop tone, as such ‘Toe to Toes’ sticks out like a sore thumb from the other two.

The final riff to ‘North Side Star’ is good in an otherwise dull track and title track ‘Cold Dark Place’ feels like a laboured ballad with little of interest to speak about apart from a pretty grand guitar solo. ‘Blue Walsh’ is a good track though and has a hint of the vitality of Mastodon full albums. It sits with ‘Toe to Toes’ to be the strongest track on the EP. Not that much of a surprise seeing as the album sessions it came from saw a better album.