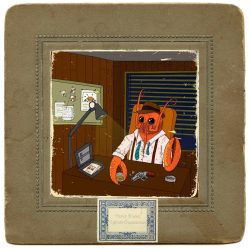 Four tracks spanning just over 17 minutes of frantic off kilter math rock and it’s a complete joy to behold. Opener ‘Physic Orca Mind War’ is as bombastic as it is intricate, bouncing from one riff to the next throwing curveball after curveball. The title track is less heavy but every bit as complex, the guitar work is astounding but one first listen it’s anything but an easy listen. Give it a couple of goes and all of a sudden, you’ll find yourself falling in love with it.

‘Her Tiny Self All But Swallowed Up in Horseshit’ has the feel of a ramped up version of Alpha Male Tea Party. The thunderous riffs pummel you, yet are immediate and infectious. Closer ‘One Track Crack Panic Attack’ throws out the obscenely complex math rock blend again. This is math rock from the left field, in the less accessible side of the genre but utterly enthralling.

Catch the band at the EP launch gig in Bristol on 21st September. Plus, Darwen on 23rd September, The Mother’s Ruin in Bristol on 9th November and MADE in Sheffield on 3rd Feb 2018.