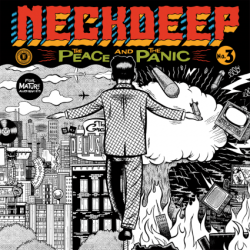 Neck Deep release their third album The Peace and The Panic on 18th August via Hopeless Records. For the Wrexham pop-punks, the trajectory of the last half decade has been, seemingly, one of unbridled success. Comprehensively the most successful British band in the history of their genre, and with an average age of just 23, they have risen – at a pace so head-spinning it nearly snapped necks – to become the zeitgeist capturing band of their generation and scene. They’ve scored Kerrang! and Alternative Press awards along the way, completed two summer-long stints and Warped Tour to unprecedented crowds, worked alongside legends like Mark Hoppus of Blink-182 and completed a 2016 headline world tour of their own which took in some 15 countries across four months and sold in excess of 52,000 tickets.

We tried to review their second album, Life’s Not Out To Get You, but there’s only so much turgid childish pop punk a man in his thirties can handle. We could just about get on board with Rain In July / A History Of Bad Decisions so it’s needless to say we went into The Peace and The Panic with quite a bit of trepidation. Shockingly, it’s not bad.

Sure it pretty much lives by the band’s template by being generic pop punk and reeks of boys trying to be men but it’s a pleasant listen. “It’s still very much a Neck Deep record,” notes lead singer Ben Barlow, “but we don’t want to be one trick ponies. We did pop-punk very well on the last album, but I think a lot of people who think they don’t like us will find plenty to discover on this one.”

It’s an opportunity to give Neck Deep another go, it’s inoffensive and easy on the ears. If pop punk hooks and angsty lyrics are your thing, then you’re onto a winner. If you have a hatred of throw away pop punk, then we’ll advise you to stay clear.

Recent single ‘In Bloom’ is the highlight with its infectious hooks and sing-along parts while you’ll find ‘Critical Mistake’, ‘Heavy Lies’ and ‘Happy Judgement Day’ to be big radio friendly bangers. It’s not all brightness though, there’s still a good amount of filler with instantly forgettable tracks like ‘The Grand Delusion’ and ’19 Seventy Sumthin’’. The insipid ‘Don’t Wait’ is worth highlighting – a shameless attempt at trying to be the voice of angry teenagers – it’s every bit as corny as expected.

While it’s not as bad as we expected it’s nothing special. Pleasant albeit a tad bland.