Irish alt rock trio Fangclub release their self-titled debut album on 4th August via Vertigo Records. Raw, direct, powerful, alt-rock, written with no frills and played with pure passion – the kind of energy that can only come from three old friends with sheer determination and “no plan B”.

Formed of singer and guitarist Steven King, drummer Dara Coleman and bassist Kevin Keane, the Dublin-based trio who formed in the neighbouring, remote coastal town of Rush when they were teenagers. Between dropping out of college for those early jam sessions and now, they’ve signed with major Universal imprint Vertigo Records, released two acclaimed EPs (‘Bullethead’ and ‘Coma Happy’), toured with the likes of Twin Atlantic and won over a dedicated legion of fans. 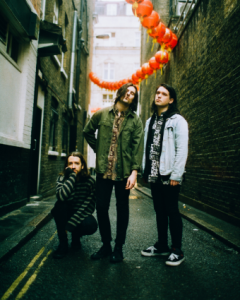 This is big accessible alt rock, and from the opening chords of ‘Bullet Head’ you know Fangclub are destined for big things. “I had watched this documentary about tribes, and there was this one that would tattoo themselves with fang symbols,” says King says of the origin of their name. “That idea just really lent itself to what we were trying to do. I was in a cafe and drew it out with the fang logo on a napkin, now it’s plastered all over Dublin. There are guys who have it tattooed on them. It feels like we have our own very tribe now”.

Three friends making ballsy riff heavy catchy alt rock, what more could you want? Make no bones about it, this is the near perfect alt rock album. It’s the kind of rock record Dinosaur Pile-Up have been trying to make, it’s takes the template polishes and hones it.

Openers ‘Bullet Head’ and ‘Role Models’ kickstart the thread of noise driven by melody, with the break-neck desert-rock ferocity of Queens Of The Stone Age met by the inescapable hooks of Weezer. ‘Lightning’ and ‘Dreamcatcher’ take the paranoid math-rock that Biffy Clyro chase and pack it with a Seattle-sized chorus – culminating in tracks like the feral rush of ‘Common Ground’ and the pure grunge nihilism of ‘Best Fake Friends’ that destine this band for arenas.

You’ve got 11 bangers here, Fangclub are ready to be propelled into the mainstream rock scene. These boys are going to be massive.