Worcester-based punk-rock quartet, Fights And Fires release their new album, Live Life Like A Tourist, on 14th July via Lockjaw Records. Since their formation in 2008, the band have released two albums, an EP, two split releases and a handful of singles, which are now completely sold out on all formats.

F&F wear their hearts on their sleeves – never ones to put scene credentials before honesty, they’re not ashamed to say that Status Quo and Thin Lizzy, as well as bands like The Bronx and Rocket From The Crypt, had an imprint on the Fights And Fires sound. “We’ve had a change of heart,” says drummer Lee Jackson “We got to a point where we were sick of being in a band. We became naively wrapped up in this vision of ‘trying to make it a success’ and we were actually overlooking the important part, which is to make sure you’re having fun.”

“A lot has changed,” adds vocalist Philip Cox “In the time between writing this and the last record, we’ve all managed to get our personal lives together. We’re much happier people now. By making ourselves happier, I feel like we’ve got a new found love for music again.” 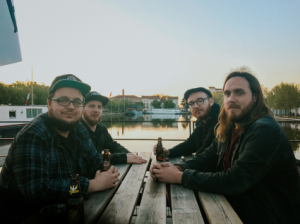 All that feeds through to Live Life Like A Tourist, making it feel like an album full of life – there’s a genuine passion shining through every element of their sound. The hardcore infused punk has a vitality and relatability making it an essential and enthralling listen. Every track reverberates with a ‘fuck you’ fizz, Fights and Fires have made peace with themselves and are happy. It’ll filter through into your subconscious and Live Life Like A Tourist will become one of your essential punk records of 2017.

Clocking in at just over 25 minutes and 8 tracks it’s a short, snappy and snarling punk attack. Thankfully it’s all filler too, it doesn’t blip even for a second, 100% banging punk. From the riotous ‘Church Bells’ to the defiant ‘Take A Swing At The World’ through to the gentler closer ‘Ouija Board’ it’s a thrilling listen that suckers you in and begs to be played again. File alongside Bear Trade in your top UK punk releases of 2017.