Chicago punks 88 Fingers Louie released their first album in 19 years, Thank You For Being a Friend, on 30th June via Bird Attack Records. The seminal Chicago melodic punk/hardcore band got their official start in 1993, where they quickly started writing, playing shows and released three 7” records during their first year as a band. The band’s sound was unique and a combination of all the things they loved about punk-­‐rock—drawing influences from 80’s California punk, east coast hardcore as well as midwestern hometown heroes the Bollweevils, Naked Raygun and Pegboy.

A lot has changed in the 19 years since Chicago’s 88 Fingers Louie last released an album. Shortly after the release of a split EP in 1999 with Philadelphia’s Kid Dynamite, the band decided to call it quits due to differences in vision for the band’s future. Its previous members went on to form and join almost a dozen new bands in the wake of 88FL’s demise (Rise Against, Explode and Make Up, The Story So Far, Paper Mice, Alkaline Trio and many more). This is a story with many stops and starts, ups and downs and many of the players have come and gone throughout the band’s career. The fact that the band is back and releasing their first full-length album in 19 years is still something that vocalist, Denis Buckley, is wrapping his mind around: “In my head, I think it’s been 10 years, but people around me remind me it’s been almost 20.  Not a day goes by since we got the band back together that I don’t scratch my head once a day and say ‘We’re actually doing this now—this is crazy,’…but I couldn’t be more excited.” 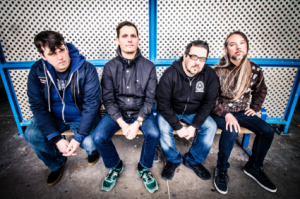 It’s an album that you should be excited about. It a time where there’s too much throw away pop punk, 88 Fingers Louie are a timely reminder of just how good American punk can be. Think classic Bad Religion, but more immediate. The lyrical themes on this record are also Buckley’s most diverse: “A lot happens in 20 years, friends get sick, friends commit suicide, relationships are amazing and those relationships end. There’s also a song on there that is our most overtly political song.” But it’s the music you’ll find most welcome. Whether you’re familiar with the band or not, this is an essential release, genuine ballsy punk rock.

It’s an album full of bangers too. There isn’t a weak track here, 12 prime slices – whether it be the commanding ‘Advice Column’, the bittersweet ‘The Violence of Denial’ or the infectious ‘Here’s to That Innocence’ this is an album to blast and forget the world.