Philadelphia Indie punks Cayetana released their second album, New Kind Of Normal, on 5th May via their own record label Plum Records. We’re not quite sure how or why it took us just shy of a month to realise the album has been released – don’t make the same mistake as us, get yourself acquainted with this gem ASAP.

While we enjoyed their 2014 debut Nervous Like Me, there was something missing. It felt a little half formed, the potential was there lurking the surface, with New Kind Of Normal Cayetana realise their potential and deliver an formidable album. 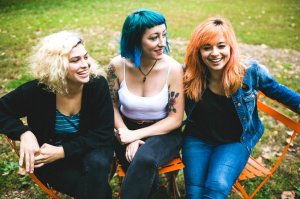 Opener ‘Am I Dead Yet?’ plays the part of raucous and life affirming punk with aplomb. There’s a feel of 90’s grunge interspersed between the jangly riffs. It’s a fuzzed-up sound that is constant throughout the album with a post grunge backdrop providing a warm and endearing sound. Lead single ‘Messa’ doesn’t really get going before ‘Too Old For This’ hints at the potential for a riff that can knock it out of the park.

Cayetana hit gold with the vintage 90’s tones of ‘Bus Ticket’, the slow post grunge groove is infectious and teamed up with the big hook you can’t help but fall in love with the track. It’s the first track on New Kind Of Normal that you get a hint of post-punk coming through the bassline, it adds another dimension to the band’s sound. It’s one that develops throughout the album bringing songs like ‘Follow’ and ‘World’ to life.

There’s a decidedly large jump in quality from Nervous Like Me. This is an album you can get on board with and enjoy from the outset. It’s the sound of a band that have grown in confidence and been able to hone their sound. ‘Easy To Love’ and ‘Side Sleepers’ play as angsty punk – coming to terms with lost love, envy and coming of age. They’re good songs that will certainly resonate with their audience.

‘Phonics Failed Me’ shines bright although it may be bookended by the two weakest tracks on the album. ‘Dust’ is a beautifully fragile and emotive track that will connect with even the coldest hearted listener – the post-punk element to Cayetana comes to fore and pushes them to the next level.