Smidley release their, self-titled, debut album on 2nd June via Triple Crown Records. Smidley is the new project from Foxing singer Conor Murphy, named after his beloved black lab mutt who is sadly no longer with us. Smidley was produced by Hop Along’s Joe Reinhart and recorded in Philadelphia at Headroom studios earlier this year, an experience Murphy describes as carefree, and a solid reminder of why he’s dedicated his life to the art form. “It was the greatest time I’ve ever had making, recording or playing music in my life,” says Murphy. “I tried to eliminate any expectations for this record and focused entirely on having a good time with it.” It was a needed break from the more serious and deliberate song writing of Foxing, and a particularly gruelling tour that left Murphy desiring a reprieve from more lofty endeavours.

As embodied by the track ‘Fuck This’, Smidley is an album says fuck you to everyone. Leave your expectations at the door and revel in the cathartic release this album so obviously is for Murphy. At every juncture, there’s the sense that Murphy is doing what he wants, how he wants. Like many side projects, it acts as a creative release for a sound that wouldn’t be suited for the creator’s day job. Imagine a bolder, less serious and poppier version of Foxing and you’ll be on the right track. 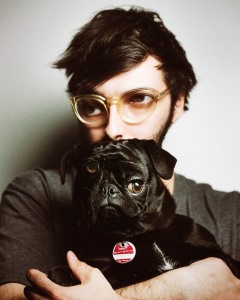 The strength of Smidley is in the playful and unguarded approach Murphy took in both writing and recording. “My favourite song is ‘No One Likes You’” he relates. “It’s a joke but one of the more honest songs to me. I talk to myself in the car all the time and feel like a lunatic. The thing I loved about it was that it made me laugh off my insecurities in the moment.” That freedom and unrestricted song writing flows through the album giving it a vibrant and assured swagger.

While Smidley is a good album, it doesn’t stand as an equal to either of Foxing’s albums. It lacks the immediacy and relatability that makes Foxing special. Only ‘Pink Gallo’ comes close to sounding like it’d fit on a Foxing album albeit it would be one of the weaker tracks. ‘Fuck This’ and ‘No One Likes You’ standout as the best tracks.