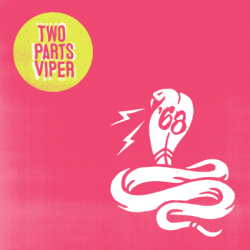 Altanta based rock duo ’68 release their new album, Two Parts Viper, on 2nd June via Cooking Vinyl America. Having toured with the likes of Bring Me The Horizon, Every Time I Die, and The Fall Of Troy to name a few, the alt-rock veterans felt it was time to take a different approach to further define their brand. This time around, Josh Scogin (The Chariot, Norma Jean) and bandmate, Michael McClellan have signed with a new label – Cooking Vinyl America – to launch their full-length album which channels everything from the intensity of At The Drive-In to Jack White-like vocals to a setup similar to The Black Keys.

If you thought being in a two piece would have calmed the aggression and frantic energy of Scogin then you’re very much mistaken. At times, it’s just as visceral and chaotic as Norma Jean, just packaged in a more accessible and immediate sound.

The opening three tracks are testament to the harnessing of the aggression into a more accessible and varied package. ‘Eventually We All Win’ starts off as a slow burner before exploding into life with a cacophony of blistering guitars and thunderous drumming; ‘Whether Terrified or Unafraid’ takes an almost hardcore approach before ‘Without Any Words (Only Crying and Laughter)’ lays on a grungy blues rock swagger. The bluesy leanings, while being more mature and progressive sounding, lack the gusto of the harder tracks and as such leave you feeling a tad numb.

While a varied sound might work for some it leads to a mixed bag where ’68 are concerned. There’s the blistering brilliance of ‘This Life Is Old, New, Borrowed and Blue’ and ‘The Workers Are Few’ separated by the lacklustre ‘No Montage’ and ‘No Apologies’. It’s the moments where ’68 go for a more relaxed (and sporadically expansive) sound that it doesn’t work as well. Without the visceral and aggressive riffs it all sounds a little bland.

That said when its good it excels beyond belief. There’s moments in the churning ‘Death Is A Lottery’ that you think ’68 might have hit gold, there’s a power and vitality at its base that should beyond a two piece. Similarly, with ‘The Workers Are Few’ there’s an ambition and grandeur that defies your expectations and thrills.