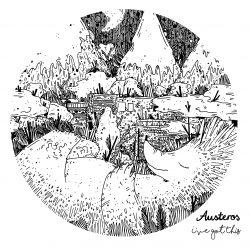 Austeros release their new EP I’ve Got This on 14th April via Specialist Subject Records. Building upon last year’s full length Painted Blue, the EP charts the past 6 months for singer / guitarist, Jeremy Pitcher. Relocating to Bristol from Cheltenham (a move that was vital for his mental heath) and navigating the current political climate.

Produced by their friend Tim Rowing-Parker (of the band Woahnows), the band wanted a real back to basics recording taking influence from early albums by The Lemonheads, REM and other late 80’s indie & punk. Perfectly complimenting and not overshadowing Austeros’ simple pop songwriting.

The EP feels like a new, focused version of Austeros – a marked step up in quality I’ve Got This is an album you can fall in love with and relate to. The blend of pop sensibilities and jangly indie punk make for an infectious and immediate EP.

In the words of Pitcher, “Island is about how we’d reached the end of our tether living in Cheltenham. It was written before we moved. Since moving, my mental health has improved considerably. My partner and I both suffered long bouts of anxiety and depression, and one day I came home from work and she wrote a tally of how things had improved. It was very moving and resulted in the song Cherished.” While,  “To Be You is about people who are so stubborn that hard cold facts don’t change their minds. In the wake of Brexit, Trump, and the rise of extreme right wing politics, people whose hatred lay dormant for so long were given a voice and are now using those voices to perpetuate that hate. Figure of Speech is about that. Just the other day I was in a pub toilet and someone asked me if I was Islamic State. Being Egyptian I’ve been on the receiving end of incidents like this, and they are on the rise.”

Although it’s ‘Dead Cells’ which you’ll find to be the highlight of the EP, focusing on Pitcher’s kicking of his 13 year, all day, every day, weed habit it’s a positive and uplifting success story. It’s certainly gone a long way in improving Austeros and making this an excellent and formidable EP.