NY duo Diet Cig will release their debut album I’m Good At This on 7th April via Frenchkiss. Diet Cig is Alex Luciano (guitar and vocals) and Noah Bowman (drums).  The duo have been playing music together ever since Luciano interrupted the set of Bowman’s other band for a lighter. The New Paltz, New York duo have since released the infectious, 2015 Over Easy EP that introduced consistent sing-a-long lyrics with thrashing drums and strums that never held back.

An infectious and immediate album full of relatable and endearing tracks that pack a serious punch. Fuzzy punky guitars over impetuous and unrelenting drumming, coupled with the female vocal will lead to inevitable comparisons to Lemuria, and while the sound may be similar this is bashier and more in your face. 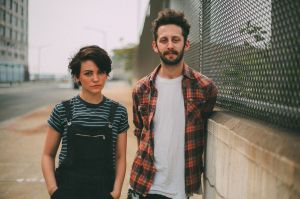 It’s the deeper, more powerful fuck-you among the bangers that see Diet Cig grow into an unstoppable and inspiring force. “I’m not being dramatic, I’ve just fucking had it with the things that you say you think that I should be” spits Luciano on the album’s “Link in Bio;” “I am bigger than the outside shell of my body and if you touch it without asking then you’ll be sorry” she yells on “Maid Of The Mist’. It’s the sound of a band doing things on their own terms.

Packing 12 songs into 28 minutes is some feat, especially when you consider none of the tracks suffer for a short duration. The two shortest tracks, ‘Leo’ and ‘Apricots’ are amongst the best on I’m Good At This with the short and snappy approach playing to the strengths of each track.

‘Blob Zombie’ and ‘Road Trip’ are the album’s standout tracks, bright, defiant and life-affirming in equal measure. It’s just about possible to get momentarily lost in the pop punk goodness. Let it wash over you and you’ll get the sense that it’s ok to be you, it’s ok to be mess – do what you want and fuck the world.

Diet Cig have produced a formidable and forthright debut in I’m Good At This. A band with bags of potential.