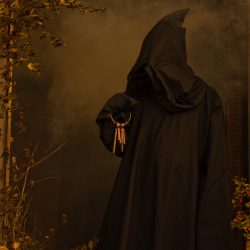 Welsh hardcore act Brutality Will Prevail released their fifth studio album In Dark Places on 24th March via Holy Roar Records. Since their inception, BWP have gone through a series of line-up changes before finally reaching their current, concrete formidable line-up. They have since made festival appearances at Reading/Leeds and Download festival, supported bands such as The Acacia Strain, Cancer Bats and Terror as well as touring throughout China, South-East Asia and Australia as well as across Europe many times over.

Lyrically the album is based around promoting unorthodox thinking, questioning the foundations of religion and dealing with the burden of unbridled self-doubt and restlessness. However, it’s in the music that In Dark Places really excels. After 11 years of honing their sound, BWP have produced their best record to date. The downtempo, bleak sludge has been mastered in 40 thrilling minutes.

Opener ‘Serpent’ introduces you to the deep throbbing riffs that’ll be common place throughout. The brutality of each riff is complemented perfectly by the growling vocal. ‘Perpetual Lows’ is bleak and devastatingly heavy in just about every way imaginable. Whether it be the questioning lyrics or the churning riffs, it’s an aural assault that will knock you for six yet is ultimately very rewarding.

‘Heretic’ gives a brief movement into super downtempo doom, before ‘Patience’ goes for a more traditional hardcore punk sound, albeit heavy as fuck. ‘Nybbas’ acts as the midpoint breather. Devastating riffs and guttural vocals are put to one side as the band explore a post-metal sound. Big atmospherics and post-rock dynamics are the order of the day, while it might act as respite from the aural assault, it’s a fine track – showing BWP to be more than a one trick pony.

Normal service is resumed with the churning hardcore of ‘Forever Restless’. Take the riff at the 2 minute 40 mark – worthy of listening to In Dark Places alone. Off the intro of feedback, ‘Death Sings Me To Sleep’ churns its way through multiple riffs into a snarling hardcore beast. Visceral and brutal, you’ll find hints towards 90s hardcore lurking just below the surface. ‘Into The Gloom’ takes a doomy spin on post-rock before album closer ‘Elegy’ bridges the gabs between the bands more experimental moments and all out riffs. It’s the most accessible and instantly enjoyable track on the album.

BWP have come out trumps with In Dark Places. It should be your essential hardcore album of 2017.