Formed back in 2012 with members at a respective crossroads with current projects, Warren Mallia hadn’t played guitar in 6 months, bassist Tom Hussey found himself in a new city with no musical outlet and despite being busy fronting Caves, Lou Hanman was itching play drums again. The result of this was Grand-Pop!

Since 2012 a lot has changed, members no longer live in the same cities and despite several live shows supporting the likes of Iron Chic, PUP & Muncie Girls over the years, Grand-Pop have never been the most prolific band. Eight Nights is an album of quality rather and quantity. 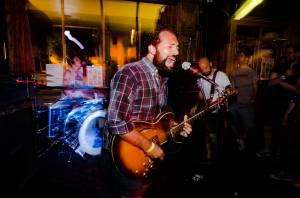 Clocking in at just under 25 minutes it’ll be over before you realise, but it’s an album that’ll provide a thoroughly enjoyable and riotous eight tracks. From opener ‘Drop Trow’ through to closer ‘Woah’, Grand-Pop hit the big hooks and choruses without stopping. While you won’t be experiencing anything new or ground breaking you can lose yourself within the infectious pop.

Second track ‘High Hopes’ has a delightfully catchy punk spike to it – think Great Cynics at their most accessible before ‘Nervous Nelly’ plays like a mash of Weezer and Superchunk, with ‘Saturday Night’ being the definitive English indie pop punk track.

Eight Nights excels in its simplicity, just good honest power pop. It doesn’t pretend to be something it’s not. There’s no lofty expectations or pretention here, uncomplicated raw fun. It’s the perfect album to unwind to, forget your worries and revel in the hooks. It’s almost impossible to listen to without hitting play as soon as it’s over. Special praise must be singled out for the anthemic ‘Soul Man’ that’ll be rattling around your head for hour after it’s finished.