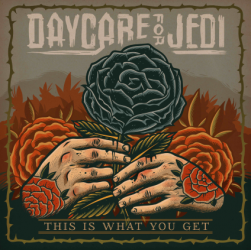 Danish pop punks Daycare for Jedi release their new album This Is What You Get on 3rd March via Prime Collective. Make no bones about it – this is accessible straight pop punk in the vein of the new wave of British and American bands, such as Neck Deep, Real Friends, Seaway and The Story So Far.

Being from Denmark is the only unique thing about Daycare for Jedi. This is generic pop punk and nothing more. It doesn’t do anything special or add anything new. Listening to This Is What You Get you could easily mistake it for any number of other modern day pop punk bands.

While it may be bland, it is inoffensive enough to be just enjoyable enough for you not to completely dismiss it. A less critical ear could even consider this to be a guilty pleasure. Unfortunately for us, it’s such an unremarkable album that we wouldn’t even sneakily listen again. So unremarkable than when preparing this review we managed 4 listen throughs and couldn’t find anything of note. It’s instantly forgettable and devoid of any originality.

Sure while it may be inoffensive and you could easily stick it on for a pit of background music you could be forgiven for finding it all a little cringe worthy. Pop punk in general is aimed towards a younger teenage / pre-teen audience but This Is What You Get lacks even an iota of credibility. Closer ‘Home’ decides to venture into easycore territory and in that you have the lowest point of a poor album. It’s one of the moments that kill your hope that there’s something good about the album.

Do yourself and let us take the hit on this one, give it a miss there’s far better pop punk out there.