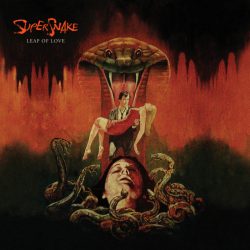 Super Snake release their debut album Leap Of Love on 14th February. Doomy psychedelica would probably be the best way to pigeonhole the sound, but perhaps the best option would be to give you word for word what the press release says…

Super Snake is a mouthful of psychedelics washed down with ten beers while listening to Black Sabbath and the dirtier parts of Sonic Youth. It wasn’t always like this, but the New Jersey quintet has recently discovered their true wheel house after dropping two independently released, warmly received, EPs. The band embarked on a special journey to ensure the recording of their recent full length was as spellbinding and unpredictable as the journey itself. “Leap of Love”, the new LP, was recorded with Kevin Antreassian from the Dillinger Escape Plan in a haunted cabin in the middle-of-nowhere northern Virginia on a 150-acre-property. The band managed to terrify neighboring horses, destroy golf carts, build bonfires so big they ripped a hole in the sky, lose large sums of money to producer, Antreassian, in high-stakes cee-lo games, detonate explosive targets with assault weapons, and most importantly, record some of the biggest, grooviest, dirtiest riffs and feedback against mountains alongside their colossal bonfires all while consuming near lethal doses of shaman-esque medicine. Yes, needless to say, “Leap of Love” is a trip. A trip that has taken nearly two committed years to complete. All the sticky details are there for your listening pleasure. Sit back, close your eyes, and enjoy the leap.

Ideally you would have listened to Super Snake without being subjected to any of the hyperbole, behind it all you’ll find a strong debut album. Reading the hyperbole, looking at the artwork etc clouds your view of Super Snake. It’s hard to get past and listen objectively.

Imagine a more accessible version of White Zombie, mixed with Mastodon and some of the grunge noise of Sonic Youth or the Melvins and you’ll be on the right track. Musically, Leap Of Love, is pretty excellent – albeit each track could probably be shortened by at least 30 seconds. It’s the concept and lyrical content of Super Snake that hinders your enjoyment. Is it all a joke and we don’t get it?

Doubt sets in when you find out lead single ‘Big Seize’ was “written from the perspective of a Nosferatu-esque character who is consumed by a dark desire for affection, the song informed the album’s overarching theme and lyrical concepts. Taking cues from B horror slasher flicks and pulp-comic elements, “Big Seize” rumbles along like a funeral dirge or a snapshot from the ‘The Devils Rejects’.” If you can get past this ‘concept’ then there’s an album to enjoy.

1 Comment on Album Review: Leap Of Love by Super Snake