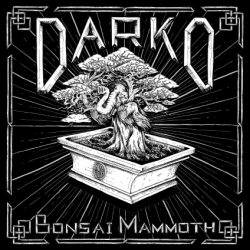 UK skate-punks Darko release their debut album Bonsai Mammoth on 3rd February via Bird Attack Records (US), Lockjaw Records (UK) and Torch of Hope (JP). This marks a change in tact for Darko, this is a more personal record, lyrically it abandons the narrative weaved through earlier EPs to focus inwardly on more personal subject matter, although they aren’t ruling out returning to their familiar concept-style records any time soon.

“We felt a lot more relaxed recording this album compared to last EP’s and hopefully that comes across,” explains guitarist Chris Brown “It certainly made things run smoother for me. We also had more time to mess about with sounds and effects that we don’t normally do, as well as giving me time to work on my right-hand technique for the technical sections.”

While Darko retain their trademark duelling riffs with an intricacy which made their early sound so compelling, there’s more to the band than just breakneck riffs on Bonsai Mammoth. This is a new and improved version of the band.

Opener ‘Life Forms’ initially makes you question if it is Darko you’re listening to. It starts in expansive post-rock atmospherics before exploding into frantic punk riffs resonating with the snarling vocal of Dan Smith. The progression of Darko is most apparent in tracks like ‘Set In Our Ways’ where their sound has been refined and honed into a compact and exhilarating march of infectious punk. It’s still a little rough around the edges, the vocal is still particularly harsh, but that just adds to the like-ability of the album. You want to see the imperfections, it’s raw and relatable.

‘Hiraeth’ bridges the gap between the band’s earlier EPs and this new-found confidence and ease. Its roots are in raucous punk and you’re treated to some wonderful thrashy riffs, but it’s the infectious hook that comes to the fore and shines through as the strongest element of the track. There’s touches of Gnarwolves at their most infectious.

While there may be a couple of tracks that miss the mark slightly – ‘In the Company of Wolves’ tries hard but ultimately falls a little short – the good far outweighs the bad. ‘Dead Horses’ is a formidable track and album closer ‘We Can Stand For Something More’ signs of Bonsai Mammoth in excellent fashion.