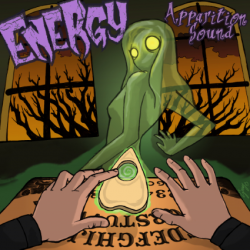 Melodic punks Energy release their new album Apparition Sound on 3rd February via Monster Party Records. An immediate, punchy album full of melodic punk bangers with hints of goth punk and pop punk hooks. Think AFI at their most accessible and you’ll be on the right track.

Energy formed in February of 2006 in the town of Stoughton, Massachusetts. Over the last decade, Energy’s signature style of somber, melancholy melodies and introspective lyrics combined with infectiously poppy hooks has truly cemented them as one of Boston’s most unique bands. This release marks a change for the band with frontman Jason Tankerley (aka TΛNK) becoming sole songwriter.

Speaking on ‘Apparition Sound’, TΛNK said, “This album represents a rebirth within the band. It was the first time in the band’s history where I was left entirely in charge of songwriting. Music, melodies, lyrics, everything. Honestly, this was not something that I wanted at all, but since both of the other primary songwriters had left the band – I was on my own for the first time. It was terrifying, but I was determined to climb out of the hole I had been thrown into by releasing what I felt was Energy’s strongest work yet.”

While you can’t consider Apparition Sound ground-breaking or a great work of art, it does melodic punk extremely well. If you want something infectious, immediate and easy on the ear then you needn’t look much further. It’s ridiculously catching, every song feels like an old favourite almost instantly. For a short album (the eight tracks come in at just shy of 25 minutes) it does its job wonderfully, no fucking about, just an immediate impact.

‘Pet Sematary’ is the big stand-out track – the chorus hits you in the face, suckers you in and never lets go. It burrows its way into your subconscious and is there for good. If there’s one track that will get you into this album it’ll be this one, there’s potential for Energy to be huge off the back of it (what else would expect from a reworking of a Ramones classic?). Album closer ‘They’ takes a more sombre approach and hints that there may be more than big melodies to the band. It’s almost an expansive all-conquering alt rock grand opus.

With Apparition Sound, Energy might just have produced their best work. This could potentially make them huge.