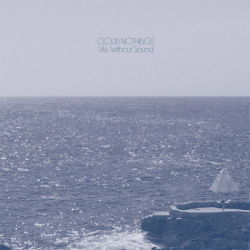 For more than a year, Baldi was able to write these songs and flesh out them out with his bandmates—drummer Jayson Gerycz and bassist TJ Duke—before they finally joined producer John Goodmanson (Sleater Kinney, Death Cab for Cutie) at Sonic Ranch in El Paso, Texas, for three weeks in March of 2016. “Generally, it seems like my work has been about finding my place in the world,” Baldi says. “But there was a point in which I realized that you can be missing something important in your life, a part you didn’t realize you were missing until it’s there—hence the title. This record is like my version of new age music,” he adds. “It’s supposed to be inspiring.”

As such this feels like the most complete version of Cloud Nothings. It’s instantaneous and enjoyable at every turn. Each of the nine tracks contain succulent pop rock hooks that sucker you in and engrain themselves. While its predecessor—2014’s Here and Nowhere Else – was critically acclaimed this is a different beast, more assured and commanding the jump in quality is astounding.

Just take the veritable pop rock gem of ‘Modern Act’ as an example. It’s hard to imagine a more complete and resonating mainstream rock sound. It’d tick every box even for the finickiest person. There isn’t a weak track on Life Without Sound, this is pop rock done with aplomb. If you need a grumble it’d be that it’s so stringently pop rock. You could be forgiven for thinking that the band have lost some of their raucous energy – ‘Sight Unseen’ and ‘Strange Year’ are the only occasions at which the band seem to really cut loose.

You have to look hard for the faults, as otherwise it’s so instantly enjoyable and relatable that you can’t help but fall in love with it.