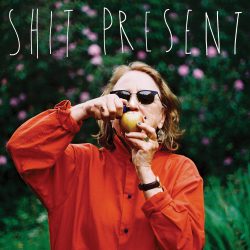 You can pretty much view this as a continuation of the first EP lyrically and musically it’s more of the same. It’s instantly likeable due to its genuine, unassuming nature. While the lyrics may explore mental health and anxiety the music makes for an easy listen. It’s light and inoffensive.

While it’s an enjoyable listen you probably won’t be rushing back for repeat listens. ‘Shit Talk’ is the standout track, commanding and forthright there’s a simmering aggression and energy that hooks you in and engrains itself. Unfortunately, the rest of the EP is forgettable.

Let’s remember that Shit Present are a side project comprising of members (or ex members) of Great Cynics, Gnarwolves and The Computers. From Misery & Disaster it’s hard to imagine this ever being more than that, it doesn’t even seem to be the clichéd ‘artistic release’ as these songs could act as fillers on a Great Cynics album.

Don’t get us wrong though, it’s not a bad EP, it’s just too meh. It’s a dull version of countless other English indie-punk bands. You may well find it endearing in its own unchallenging way, it’ll seep into the background without grabbing your attention.

Misery and Disaster is a wasted opportunity; it could have been great. Bitterly disappointing.