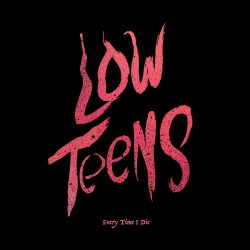 Buffalo, New York hardcore band Every Time I Die will release a new album Low Teens on September 23 via Epitaph. “The whole winter, the temperature was in the low teens. Bitterly cold,” front man Keith Buckley regarding the months that yielded their eighth full-length album. Don’t mistake this for an album about the weather, this is a visceral and cutting album – musically and lyrically – that is uniquely ETID.

If you’re unfamiliar with Every Time I Die then we have to ask what you’ve been doing with your life, but you’re in for a treat. Low Teens is the band at their very best, taking their trademark sound between visceral hardcore and measured melodic hard rock and ramping it up a notch. The fact that Brendan Urie (Panic At The Disco) guests on the brilliant ‘It Remembers’ shows the versatility of the band yet it’s just one point on Low Teens that you get a timely reminder that ETID are a truly special band.

While the band are no strangers to blending rock melodies with brutal hardcore heaviness they’ve never done it with such aplomb. With 13 tracks coming in at just under 45 minutes it’s a pleasant surprise there’s nothing that comes close to a weak track. Everything here is pure brilliance. Whether it be the cutting brutality of ‘C++ (Love Will Get You Killed)’ or the measured rock swagger of ‘Two Summers’ you can’t help but fall in love with Low Teens. The latter is a delectable slab of big ballsy rock in the form of a frantic version of Alice In Chains, with a real killer riff thrown into the mix.

The intuitive speed of ‘I Didn’t Want To Join Your Stupid Cult Anyway’ is ridiculously infectious, then the stomping breakdown and crescendo follows to make it a real standout. ‘The Coin Has A Say’ reminds you of The Big Dirty material with a slightly more sinister urgency – absolutely brilliant. The final three tracks of Low Teens are amongst the finest tracks committed to record by the band. ‘Just as Real but Not as Brightly Lit’ feels measured and has the air of a band that may just have perfected the melodic hardcore genre – those final 20 seconds – waowzers. ‘1977’ is pure nihilistic hardcore with elements of thrash metal thrown in before ‘Map Change’ sees ETID throwing in some of their best and most immediate melodies.

Since their debut Last Night In Town 15 years ago ETID have been one of those bands you feel have peeked with their latest album, then they go and better it. If you want to put it against previous material, it’s a blend of The Big Dirty and Ex Lives, but it’s so much more than that. Superb.