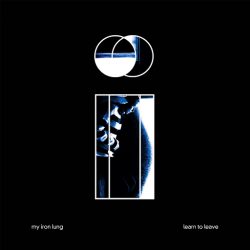 Californian post hardcore act My Iron Lung released their new album Learn To Leave via Pure Noise Records on the 5th August. While the first thing that strikes you about the band is the fact that they’re named after a Radiohead EP, the more pertinent thing is how unoriginal Learn To Leave is.

Sure it’s a perfectly enjoyable album, but it’s nothing more than run of the mill when you get down to the bare bones. It doesn’t do anything special and doesn’t try to meander slightly from the tried and tested template that their contemporaries have mastered. The blend of post-hardcore, melodic hardcore and a smattering of emo has become the sound of the day in the last couple of years and while My Iron Lung do it well it feels like they jumped on a bandwagon and aren’t providing anything new.

There’s nothing new on Learn To Leave, every one of the of 11 tracks could easily masquerade as a B-Side for Title Fight, Pianos Become The Teeth, La Dispute or Basement. You could probably forgive the band if any these songs were equal to anything produced by the afore mentioned bands. Unfortunately, that’s not the case and it’s impossible to ignore.

It’s a shame too because it isn’t a bad album, it’s all just a little too meh. It’s perfect background music, imagine wanting to listen to Title Fight but also needing to get something done and not wanting to be distracted – My Iron Lung are the perfect solution.

‘Learn To Leave’ and ‘Somnium’ standout as the best tracks and ‘When Tragedy Strikes’ threatens to be a storming track. Put a bit of Pianos Become The Teeth on after and you’ll find them to be pretty ordinary. Luckily the band have fitted these 11 tracks into just over 30 minutes so you’re not going to have given up much time on it. The fact that these songs don’t pack a punch and aren’t developed past the 3 minute mark should tell you a lot.

Put it on the background, try to ignore how the influences are worn on their sleeves. There’s a good band lurking under the surface somewhere.