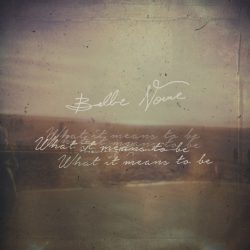 San Jose quartet Belle Noire release their new full length album What It Means To Be on 15th July. Think big rock anthems with a bit of flair, think of it as a high grade accessible alt rock. It’s a blend of modern day Thrice, o’brother, Moving Mountains and Indian Lakes.

Big emotive rock is the order of the day, as the band explain, “As a group, we dealt with many personal issues during the process, and we’re thankful we pulled through it to get this album completed. The most important thing to us is the music, and that’s the reason we’re here doing our thing”. The cathartic nature of the album is there at the fore, without it What It Means To Be wouldn’t be half the album it is.

Belle Noire are a band with talent and potential in abundance. The nine tracks on What It Means To Be simmer with quality and there’s a real sheen to each one, they just seem to lack a lasting impression. It’s a good album, enjoyable and inoffensive; you just won’t be rushing back to it. The result of What It Means To Be is quite strange, you have all the right ingredients for a brilliant album yet it just falls short of coming together perfectly.

Perhaps it’s the production; it’s glossy and pushes the band towards a stadium rock sound losing any raw energy and urgency. You get the feeling that tracks like ‘Regret’ and ‘Who We Really Are’ could have been absolute belters if there was just something slightly different.

Conversely you could also say that there isn’t a bad song on What It Means To Be. You’ll like them all enough to enjoy the album but you won’t have it on repeat. It’s interesting enough that you couldn’t consider it bland – it just lacks impact. Consider this the perfect background rock album, got some friends round? Need something in the background to create an atmosphere but not distract? What It Means To Be does the job perfectly.