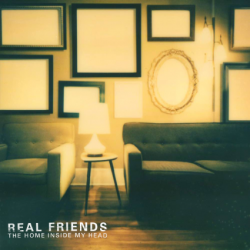 Chicago emo pop-punks Real Friends release their new album The Home Inside My Head on 27th May via Fearless Records. Their brand of heart-on-the-sleeve pop-punk has garnered the band a lot of attention, while some may dismiss this as attention from a young ‘scene’ crowd, it’s certainly not without merit.

It is obvious from The Home Inside My Head that the band are at the very top of their game. Their debut Maybe This Place Is The Same, And We’re Just Changing bought the band to the fore of the pop-punk scene, this album will catapult them into the rock mainstream. When it comes to emotionally laden pop-punk this is the very best, you’ll be hard pushed to find something more infectious and emotionally charged.

You won’t find a weak song here either, in a scene where bands maybe have 4 or 5 (at the very most) standout tracks on an album Real Friends really excel. From the opening chords of ‘Stay In One Place’ through to the album closer and lead single ‘Colder Quicker’ you’re hooked. ‘Keep Lying To Me’ has the hallmarks of a track that’ll make Real Friends massive. Hell, it wouldn’t be a push to liken it to the gravitas that ‘I’m Not Okay (I Promise)’ by My Chemical Romance had when it first came out. It has the same big emotional hook that suckers you in and begs you to sing along.

You’ll have people that dismiss Real Friends due to how obviously emo they are, they’re missing out here. It is exactly what makes the band and The Home Inside My Head so good. You’re not going to get any more emo than ‘Mokena’ and it’s wonderful because of it – there’s not many people that can’t relate a little to fucking up, getting over it and picking yourself up. The pop-punk element to Real Friends just helps you fall in love with the band even more. ‘Mess’ hits home how infectious the band are; you’ll be hard pushed not to sing ‘last year I was a train wreck, now I’m just a mess’ back to the band; follow that up with ‘Isolating Everything’ and you might just be entertaining the thought that Real Friends are your new favourite band.

‘Well, I’m Sorry’ and ‘Door Without A Key’ are heavy on the emotion and while it works brilliantly when the band focuses on the emo side it is when the band pair it with the big pop-punk sound that they really excel. ‘Basement Stairs’ is the perfect example, both tones play off each other perfectly. ‘Eastwick’ provides a big stadium style lighter in the air moment before album closer ‘Colder Quicker’ shows the band at their best and stirs thoughts of a blend of My Chemical Romance and Blink-182.

Sure The Home Inside My Head won’t be to everyone’s taste, luckily it suits Alt Dialogue down to the ground. Get all over Real Friends before they become massive.