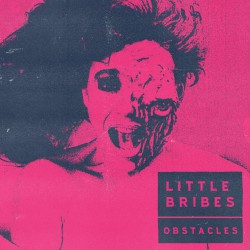 Nottingham alt punk rock act Little Bribes have released their debut EP Obstacles. It’s the culmination of a year together as a band. In such a short space of time, Little Bribes have gone from opening up open mic nights in beaten down pubs to supporting Turnover, Sorority Noise and Johnny Foreigner.

The talent behind Little Bribes is obvious, from the storming opener ‘Between Blood’ to the refined modern American emo-punk of ‘Cartography’ it certainly doesn’t take a genius to work out that Little Bribes are ones to watch. The latter is a particularly strong track that could stand the test beside Title Fight or Sorority Noise while ‘Deadname’ combines a punk snarl with an indie twang that makes for an infectious and immediate track. ‘Deadname’ in particular deals with the trappings of gender and discrimination. Speaking of the song, vocalist George Gadd said “My best friend of about 9 years told me they were transitioning to feel more comfortable in their own skin. I was in Barcelona and later that day I read an article about another transgender person being murdered in America and it upset me a great deal. Flicking through, I saw the figures adding up. I wrote this before my friend publicly came out but it was addressing anyone who is stupid enough to not let people feel comfortable in their own skin. Thankfully, everyone was very supportive.”

‘Raggy Dolls’ has an infectious urgency that you can help but get on board with before EP closer ‘Living Room’ stands out as being an emotionally beautiful and tender track. Do yourself a favour and stream the EP in full below, it might just have found your new favourite band.