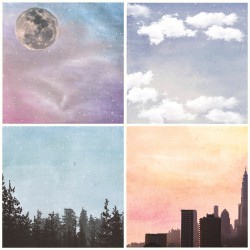 Filipino math rock band Tom’s Story released the new self-titled in January and while we almost missed out on it, we’re here to ensure you don’t. Tom’s Story is the epitome of chilled out math rock. Forget the franticness of British-centric math rock, this feels comfortable in its refined skin, more akin to Japan’s Toe than anything else.

Comprised by Gabba Santiago (guitar), Tom Naval (bass), and Christer de Guia (drums), the band officially formed in 2010, during their senior year in high school. Heavily influenced by Taking Back Sunday and Circa Survive, they started playing at punk shows south of Manila.

In 2012, the band opened for Malaysian indie act Silent Scenery’s Manila tour in B-Side, Makati City. A year later, they released two tracks via a split EP with two other local bands, Legarda and Monochrome. By then, Tom’s Story’s sound had evolved from punk rock to instrumental rock, treading a significant shift in sound. During the same year, they were one of the opening acts for Singapore-based post-rock band Anechois, for the latter’s ‘A Shadow of Sound’ tour in SaGuijo, Makati City.

The 2016 version of Tom’s Story has that instrumental template harnessed and mastered. While having the standard intricacies of math rock the band’s sound is awash in post rock dynamics and atmospherics. For many bands that walk the line between math and post rock the intricacies and complex guitar parts can come at the price of emotive atmospherics. Fortunately there are both in abundance on Tom’s Story. It’s perhaps what makes the album so enjoyable and infectious.

The album flows wonderfully too and could be viewed as one solid piece of music. There isn’t a particular stand out track simply because they’re all exceptionally strong. Each track will have its own nuances that you’ll pick up differently on each listen, while you may hear a track differently depending on your mood or environment it still comes together wonderfully and cohesively.

Stream the album in its full glory below. Let Tom’s Story become your new favourite band. This is essential listening.