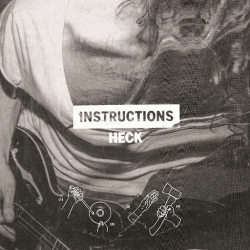 Championed in all areas of the rock press, HECK (formerly known as Baby Godzilla) released their debut album Instructions on 11th March and it’s an album that not only lives up to the hype but one that exceeds it. Firstly the job of giving you some idea of the noise HECK produce (if you’ve been living under a rock); unbridled anarchy, mathcore and a blend of Dillinger Escape Plan and Pulled Apart By Horses should put you on the right track.

Comparisons to the abrasive and challenging sound of the Dillinger Escape Plan is easy but well within reason. It’s just as wild and blood pumpingly exciting, yet also takes in the excellent structure and refinement. The reckless abandon combined with an ability to make it utterly infectious (like Pulled Apart By Horses) is displayed perfectly on the storming, brutal and accessible ‘The Great Hardcore Swindle’. With that you’re only touching the surface.

You get the feeling throughout Instructions that HECK are a band still learning how to harness their live energy and how to commit it to record effectively. There’s something slightly flawed to the sound, yet conversely you’ll be hard pushed to find a truly weak track. There may be times that a track is unnecessarily fleshed out (‘Don’t Touch that Dial’) or when you feel it requires a little more (‘Fast Back’) although these tracks can still be considered remarkably strong and the genuine quality comes through in abundance.

The blistering punk of ‘Mope’ sets the blood racing early on and you cannot help but be blown away by the complexity and relentless energy of ‘A Great Idea Bastardised’. The latter is a real high point that marks out HECK as a truly special band and goes to making Instructions the album the UK rock scene has been calling out for. The unbridled energy and simmer rage of HECK is perfectly encapsulated within the superb ‘The Breakers’. The devastatingly heavy riffs are a punch to the face while you can’t help but feel some primal affinity with the energy at the core at the band.

‘White Devil’ shows HECK at their chaotic best before the best left to the end with the phenomenal three part track ‘See The Old Lady Decently…….’. Acting as the perfect album closer you get all the different sides of HECK in 16 glorious minutes – discordant hardcore, precise mathcore, punk with immediate and accessible moments it could just be the finest track committed to record in 2016. Do yourself a favour and get in on the HECK action before they’re absolutely massive.