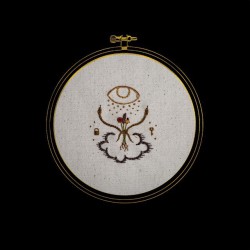 Into It. Over It. release their third album Standards on 11th March via Triple Crown Records. While being considered the solo project of Evan Weiss he’s teamed up Joshua David Sparks again, decamping to the Vermont woods, they holed up in a small cabin heated only by firewood, spent 12 to 14 hours a day writing music, and came out with 12 tracks that now make up Standards .

While there are glimpses of the quality that made many consider Into It. Over It. the leading act in the emo revival it’s a bit of a damp squib. It all feels a little lacklustre, set Standards beside Weiss’s other work (especially Their / They’re / There) and you can’t help but feel disappointed. Hell even put it up against Into It. Over It. other material and it feels like something is missing.

On a plus point Standards does feel more focused and fully formed. In previous work you got the feeling that certain songs were rushed and could have done with a little more attention to detail. Take opener ‘Open Casket’ as the perfect example; it has an excellent structure and a planned direction that makes it more complete in comparison to previous material. The only problem being that it, and songs like ‘Your Lasting Image’ and ‘Old Lace & Victory’, don’t do much to affect the listener.

The overarching feeling you get from Standards is that Weiss has perhaps prioritised the mainstream accessibility of Into It. Over It. at the detriment of what made the band appealing. It’s as if the band is morphing into an American emo version of current day Frank Turner. Like Frank Turner, this in no way a bad album it all just feels a little stale and boring.

Standards excels is when Weiss throws off the shackles and passion and life are injected into the tracks. Songs like ‘No EQ’ and ‘Vis Major’ thrive in their reckless abandon while ‘Adult Contempt’ is the peak of Into It. Over It. with its frantic and complex drumming throwing its restraints aside allowing the track to develop and burst into a beast of a track. Sitting beside the beautifully intricate ‘Required Reading’ you get the feeling of what could have been. That feeling is further enhanced by the latter half of ‘Who You Are ≠ Where You Are’ brightening an otherwise dull track. As whole the album has its merits and is an enjoyable listen, you just end up a little numb.