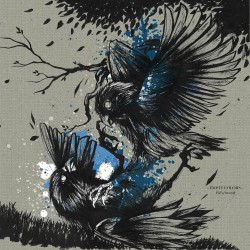 French act Fall of Messiah release their new album Empty Colours on 26th February via Lonely Voyage Records in conjunction with Holy Roar Records, Voice of the Unheard, i corrupt records, Don’t Trust The Hype recordz, and Uproar for Veneration. To categorise Fall of Messiah into one genre would be a feckless task, it may have post rock at its basis but it is way more than just that.

Opener ‘Monochromic Synesthesia’ eases you into the album with its gentle post rock atmospherics before ‘The Grey Heart Blues’ announces Fall of Messiah as a real force to be reckoned with. The devastating riffs and pounding drums have a post-metal feel while there’s still enough of a hint of post-rock structure to make you think of first album era Maybeshewill.

‘Blue Ruin’ packs another serious punch, the drumming and heavy riffs combine to beat you to within an inch of your life, conversely the gentle parts of the track are alarmingly beautiful. They still pack a punch, this time it’s more emotional and while the swirling guitar parts resonate you’re again reminded of an early Maybeshewill. There’s a hint of math rock intricacies just under the covers of the commanding ‘I Always Thought That One Day Everything Would Be Settled, But Everything Just Went Black’. While the blast beats make you sit up and take notice, once again it’s how they sit in stark contrast to the quieter, layered guitar parts that make you think that Fall of Messiah are something special. The quiet – loud –quiet – loud structure works perfectly here and as such it’s the standout track on the album.

‘Alors on en est là, à pisser sur du cuivre’ plays the part of the quiet atmospheric track. Whilst the quality is undeniable it doesn’t quite catch the imagination as forcefully. ‘Rust’ regains that vice like grip of your balls, the pummelling introduction sparks you into life before the stark loud – quiet structure acts like some kind of shock and awe campaign. The final minute of the track is ridiculously good with screeched vocals almost hidden within mix and the explosion of complex guitars rounds off the track in superb style. ‘Vert-de-gris’ does what any good album closer should do and encompassed the different sounds and styles of Empty Colours within one track. Once again the contrasting post metal and post rock sounds highlight what makes Fall of Messiah special and Empty Colours such an enthralling listen.