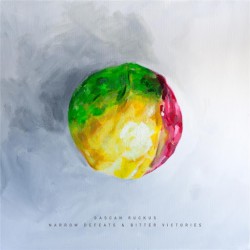 Belfast based Gascan Ruckus have released their debut album Narrow Defeats and Bitter Victories. The Armagh raised boys carved out a niche in the local scene, harnessing their blend of heavy riffs with a pop sensibility that gives them an instantaneous appeal. As the band say themselves its ‘pop songs for Sabbath fans’.

Undoubtedly this is the best work to date from Gascan Ruckus, more telling though it’s also the best release from a Northern Ireland band in the last six months. That’s probably more indicative of the current level of the Northern Ireland music scene; Narrow Defeats and Bitter Victories wouldn’t have the same stature in other countries, never mind cities. The problem with this album is that viewed amongst the wealth of new music being released these days, it isn’t anything special. It’s good and thoroughly enjoyable yet it’s generally pretty unremarkable and you won’t be rushing back for a second listen.

There are some cracking tunes here, ‘Goodbye’ and ‘These Days’ both have a great pop rock charm. The latter is a particularly infectious and raucous number while the former has a refined quality that suckers you in. The groove is a high point and when the track sporadically explodes you get a glimpse of the potential of how good Gascan Ruckus could be.  Unfortunately the three tracks between the two don’t have the same quality and while they still have their own merits and are perfectly fine they don’t leave a lasting impression.

‘Fun’ does exactly what it says on the tin, providing a bounce and a wry grin, while ‘Fuck This’ deals with the frustration of everyday life. Ironically it can also relate to the listeners patience with the album by these stage. Essentially, opener ‘Bitter Victories’ sets the album off on a path that you think leads to a great things but rather seems to have taken a diversion through (and got stuck in) mediocrity.

Narrow Defeats and Bitter Victories is an enjoyable and pretty inoffensive album. As a listener you’ll find it to be enjoyable and perfect background music. Unfortunately you won’t be rushing back for a second or third listen.