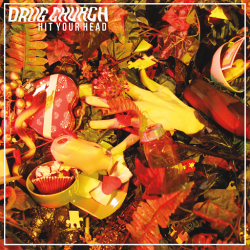 New York alt punk outfit Drug Church have released their new album Hit Your Head. It’s a bit of strange one, it has all the elements required for a good alt rock album and for the most part it’s a highly enjoyable album, yet it isn’t an album you’ll rush back to.

Since its release, the album has had several plays and I still can’t decide if I like it or not. It lacks the immediacy of previous album Paul Walker or recent EP Swell, and while it’d be fair to say there isn’t a bad song on Hit Your Head it would also be fair (and more pertinent) to say that there isn’t a strong there either.

Glimmers of real style and panache come in the form of ‘Bagged’ and ‘Green Like Me’ with their soaring and dirty guitar riffs. In these instances the strained vocal plays as the perfect accompaniment to the bolshy dirty riffs. There’s numerous other points in the remaining 9 tracks that you’ll waiver and think this is a pretty decent album, yet viewed as a whole you’re left numb.

Essentially, Hit Your Head is one of those really difficult albums to review. It has merit yet it is devoid of any lasting impact meaning that the album could be summed up in one word – meh. It’s hard to see past the disappointment you feel in Hit Your Head. Drug Church have the talent to be a very good band and there is an obvious potential within each track yet it is never truly realised. You feel that each track, especially ‘Hit Your Head, Greedy’, threaten to deliver a punch and have an impact; however they all flatter to deceive.

Album closer ‘What’ is a glimpse of brilliance. The spoken word element gives and slow guitars give the track a wonderfully haunting quality. The story itself shouldn’t be particularly interesting, the common story of being dissolutioned with everyday life and buying avocados from a shop, yet there’s a sinister quality that keeps you interested. The story itself ends abruptly without a proper ending, much like the general feel of the album.

Don’t get me wrong, Hit Your Head isn’t a particularly bad album. There’s talent and potential there which will be enough for some listeners and long-time fans. The disappointment that Drug Church haven’t been able to realise their full potential over rides this though. The songs just don’t  work as an album, stand alone or as EP maybe.