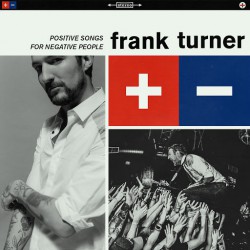 With the release of Frank Turner’s sixth studio album Positive Songs For Negative People you get the feeling that Turner’s march towards mainstream popularity has just been taken up a notch. It’s only a matter of time now before Turner becomes a household name; sure he’s practically there already, with a performance at the London Olympics in 2012, sold out Wembley Arena shows and multiple tracks on prime TV. Yet Positive Songs For Negative People will cement that place, it’s pop rock done to the highest standard, it’s accessible and inoffensive; ideal for the mainstream.

For the most part Positive Songs For Negative People is a strong album. There are some brilliant tunes that remind you of how good a lyricist Turner can be, moments that are awash in punk passion that resonate and inspire. Unfortunately there’s filler in there too. There’s songs that you feel are going through the motions. Songs about broken Britain and alienation worked brilliantly on 2007’s Sleep Is For The Week and 2008’s Love Ire & Song and while some of that magic is revived you get the feeling it’s all a little contrived. Take ‘Get Better’ and ‘The Next Storm’ as examples, they should be the archetypical Turner song, while they’re still decent you end up feeling a little numb.

Turner’s previous two albums, (England Keep My Bones and Tape Deck Heart) diluted some of the passion of his early work. Whether that’s due to the fuller sound with his backup band The Sleeping Souls or natural growth remains to be seen. Positive Song For Negative People shows glimpses that that early magic can be blended with the big, mainstream sound successfully. ‘Glorious You’ is a fine pop rock song that hints at being great yet never really hits the mark.

You have to wait until the halfway point of the album to find a genuinely brilliant song. ‘Mittens’ is full of passion and bluster, lost love and regret are the order of the day. The clever lyrics shine through as the harmonies and hooks sucker you in. There’s hint’s of the punk energy of old Frank Turner which feeds through into the raucous and exhilarating ‘Out Of Breath’. It has the air of a drunken gig song; you can’t help but sing along. There’s a slight blip in ‘Demons’ before another bolt of brilliance comes in the form of ‘Josephine’. An anthem that would stand brilliantly alongside ‘Photosynthesis’ live; it’s a fine example of Frank Turner at his very best. This is a different Frank Turner though, it’s ridiculously accessible and radio friendly. ‘Love Forty Down’ revels in Turner’s lyrics, a song of fighting against adversity and being the underdog it’s uplifting and powerful.

‘Silent Key’ could be considered the reference point to which modern mainstream rock songs be held against. Again it’s of the highest calibre, the structure and different tones give it a real magic. Big rock moments mixed with quiet interludes, guest female vocals and a big impassioned sing along finish make it superb. The deeply personal and emotive ‘Song For Josh’ sends goose bumps down your arms and brings a tear to eye. There’s a powerfulness that needs to be heard to be believed.

Positive Songs For Negative People is a return to form for Frank Turner, although the first half of the album is weak in comparison the second, it packs a punch that you can’t help but love. The second half is so strong you forget about the duds. This is Frank Turner’s opportunity to achieve mainstream success, PSFNP, does the job.