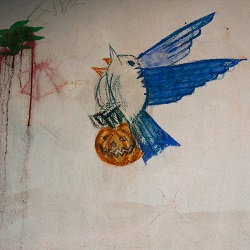 Brit rock band Odd Rival release their debut EP Keep Repeating on 23rd July. It comes out sounding like the bastard child of Foals and Ride with a smattering of Manchester 90s indie rock. In Keep Repeating you have 5 excellent mainstream rock songs that make an enthralling listen.

There’s something about the sound of Odd Rival that doesn’t sit easy. There’s one too many times that the band step dangerously close to Kasabian sounding territory. It’s most noticeable on opener ‘Slave’ and fleetingly in ‘Collide’. Put that to one side and Keep Repeating is a great EP, the big blustering riff to ‘Out Alive’ and its sing along chorus will sound great live and the John Squire-esque guitar solo on ‘Paper Tiger’ are highlights. The latter is a particularly strong track that marks out the potential at the core of Odd Rival.

The hard rock groove saves ‘Collide’ from itself, while the guitar solo transforms it into a strong track. EP closer ‘Immolation’ is a storming track that shows Odd Rival at their most unique and best. It’s as if the shackles have been cast off making this sound more natural and as result it’s the strongest track on Keep Repeating.

Odd Rival wear their influences on their sleeves on this EP, at more than one point you’ll be transported back to the 90s indie rock scene, yet the potential of Odd Rival is obvious. It’s an ambitious and exciting debut, expect big things.