Hot on the heels of the release of their new album Joy, Departed we got chance to catch up with Sorority Noise vocalist Cameron Boucher. Read our interview below and read our reviews of Forgettable here and Joy, Departed here.

The new album, Joy, Departed is released soon. First thing that hits you is the progression from Forgettable. What factors led to the change in sound?

Well when we recorded Forgettable the band was myself (Cam), Jason and Kevin. When we started recording Joy, ‘Departed’ the lineup included a new drummer and bassist, Charlie and Ryan, respectively, as well as the addition of a second guitarist, Adam (aka Scuff). I think the movement to a four piece was a huge sonic development and allowed us to explore a number of different ideas we couldn’t have as a three piece. It’s also fair to note that Charlie and Ryan both come from a pretty atmospheric musical background so my adoration for post-rock intertwined with theirs and I think that’s where we arrived with this new record!

Forgettable saw you, somewhat unfairly, being categorised as an emo band. Was there a conscious effort to move away from the genre on Joy,Departed?

I don’t believe that there was as much of a conscious effort to do so as much as it just happened. There’s so much “emo” music out there that I think it’s a genre best left the way it is. In 2005-2009 the music I enjoyed most was just labeled as “alternative rock” and I wish that was still a valid way to describe a band in our scene because I have always found that much more suiting.

The band has a good pedigree in musical education, how has that impacted upon the sound and workings of the band?

We’re just a bunch of freaks, really. I just graduated with a degree in audio engineering/jazz saxophone, Adam graduated in acoustical engineering/upright bass, and I believe Ryan studied electrical engineering. I think this all comes into play due to the culmination of the studies but I don’t think it makes a huge impact on the sound. It definitely helps us fix our instruments easier but I try to keep my musical education as far away from the music I write as possible, it just causes a lot of overthinking and less organic decisions in the writing!

What influences impacted upon the new album and are there any bands that you took inspiration from to change your sound?

We all have very different tastes in music, from Thrice to Regina Spektor, to Teebs and Baths, to Zeppelin, so I think bringing all those together helps develop a new sound, not similar to the influences but different from the way the song is initially envisioned. We tried to challenge ourselves writing wise with this new record so that we were constantly figuring out new ways to play the songs live and adding and changing parts so that definitely took an impact on the sound as well. 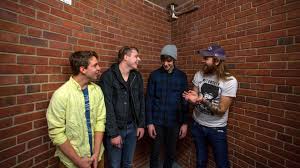 Lyrically the album seems very personal. Can you tell us a bit more about the content and how was the writing process?

The lyrics seem very personally because they are very personal. There are a few songs on this record that are so specific to my life that it seems impossible to me that anyone may be able to relate to it but who knows! The album focuses more on dealing with depression and anxiety as well as many other self-deprecating concepts so the writing process was pretty much trying to get all of my problems out in the open and off of my chest.

The UK release date is nearly two weeks after the US release date. How did that come around? Was the band involved in the decision or is solely the record company?

I honestly have no idea why that may have happened so it’s probably a label thing. I’ve always worked with Dog Knights Productions, Darren is a super homie and makes everything rad and they’re one of my favorite labels going right now, but that’s my only other experience releasing music in Europe!

This is your first release on Topshelf Records. You seem like a good fit, how did it come about and how’s it been so far?

I’ve bugged Kevin for honestly like 4-5 years now to work with me and we finally found a project worth working on together! It’s been really awesome, Seth and Kevin have all made the process fairly seamless and I have nothing but great things to say about them!

What’s on the horizon for Sorority Noise?

We’re going on tour with Motion City Soundtrack and The Spill Canvas in the states, playing Common Ground Festival and Wrecking Ball in that time period, then immediately after going out with You Blew It! and Microwave! Then some time off and a full U.S. in the fall of next year! It’s all very exciting!