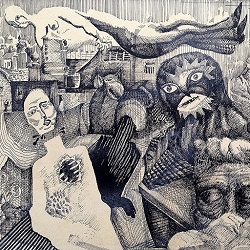 Due for physical release in the UK on 24th July, available online already, Pale Horses is the new album from mewithoutYou. Known for their spoken word vocal style and intricate alt rock, many point towards the band’s 2004 seminal release Catch Us The Foxes as the album that married the best parts of math rock and post-hardcore.

Pale Horses is every bit as good. Instantaneous and more accessible, the early chords of ‘Pale Horse’ sucker you in and from there on it’s a glorious and enjoyable listen. That’s not say it isn’t a challenge at times, when we say it’s more accessible that needs to be quantified in terms of their previous work. It falls somewhere between the more abrasive Catch Us The Foxes and the campfire songs of It’s All Crazy! It’s All False! It’s All a Dream! It’s Alright. 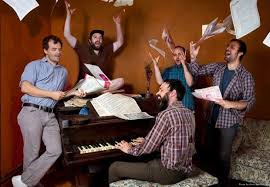 Take lead single ‘Red Cow’ as an example, there’s more of a hint of melody in the quieter moments, before the crunching riffs and snarling vocal comes into play. There’s a ridiculously superb bass line and it’s a compelling listen. On the flip side you have tracks like ‘D-Minor’ and ‘Mexican War Streets’ that layer complex textures, intricate guitars and free-ranging drumming to form something immediate and enjoyable. Lyrically, Aaron Weiss is a cryptic as ever. For the most part it’s difficult to relate to, yet there are moments were the words are so perfectly constructed that they resonate and strike a chord. Simple yet emotive line like “Can you take the form of my dead father / because I think he would’ve liked to meet my wife / and I know for a fact he would’ve liked my wife” from ‘Dorothy’ tug at your heartstrings.

‘Blue Hen’ has a brilliant defiant air while the delicate tones of ‘Lilac Queen’ are a real delight. The bassline throbs while the sumptuous guitar work creates a tone that’s full of emotion. As the track breaks down and takes a more abrasive route in the second half you’re met with a glorious cacophony of drums and off-kilter guitars. Not for the faint hearted, but compelling all the same.

It’d be fair to say Pale Horses falls slightly short of 2006’s Brother, Sister. It doesn’t have the intensity and doesn’t wow you as much. That feeling could come though, Pale Horses grows on you with every listen. ‘Birnam Wood’ and ‘Rainbow Signs’ are two phenomenal closing tracks. The latter is particularly strong and you’ll be transported into an alternate universe where intricate guitar riffs dance around you and stoke you to sleep before becoming things of nightmares. The riff at 3 minutes 20 is perfect, devastating and sinister sounding. Coupled with Weiss’s defiant vocal it’s a phenomenal end to the album. Pale Horses is up there with the bands best work and is an essential listen for any alt-rock fan.