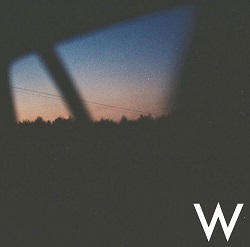 Scottish Alt-Rock act We Came From Wolves release their debut, self-titled album on the 1st June via Saraseto Records. The band are creating waves, with two highly acclaimed EPs under their belts their debut comes with high expectations and boy do they deliver. Full of big hooks and plenty of opportunities to sing along, you’ll find We Came From Wolves to be an enthralling listen.

All eleven tracks are prime slices of alt-rock, each having its own edge and hook that draws you in, making for an album that not only flows brilliant but marks the band as one to watch in 2015. It is an accessible and immediate album that will have mass appeal, yet there’s a simmering aggressive sound just under the surface that gives it a harder edge.

Lead single ‘Glasgow Stranger’ makes a real statement of intent. After the gentle intro of ‘Wolves’ it hits you like a punch to the cuts. You’re ears prick up and it’s instantly apparent that you’re listening to something special. The hook is especially glorious, after a couple of listens you’ll be throwing your arms in the air and singing along. ‘Am I Useful’ has a big stadium rock sound mixed with touches of Rueben and The Xcerts, lyrically it seems introspective yet again you can see potential for mass appeal.

‘Coraline’ is a phenomenal track, the meaty riffs thrill while the hook suckers you in and never lets go. There’s a Fighting With Wire (at their most infectious) quality to it, hell it’s a ridiculously good pop-rock song that would be high up in the arsenal of any alt-rock band. ‘Butterflies’ has a glorious churning and throbbing riff before the stomping groove of ‘Where’d Your Love Go’ simmers leads you into the refined and classy ‘Validate Me’. The quiet intro segues into a huge ferocious riff that works superbly with the impassioned vocal.

‘You’ve Backed The Wrong Horse’ and ‘I Know Your Leaving’ sees a return to the big pop-rock hooks. It’s at moments like this, where We Came From Wolves couple driving drums and deeps riffs with big hooks, that make you stand up and take notice. The latter is particularly poppy, think 2000s Fall Out Boy with less pop-punk and more straight out rock. ‘Ruiner’ has a brilliant jaggedy groove while album closer ‘I Need Something’ slows things down and tugs at the heart-strings.