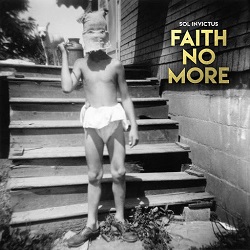 Naturally with that 18 year gap, Sol Invictus comes with much anticipation, further enforced by the formidable lead singles ‘Superhero’ and ‘Motherfucker’. While Sol Invictus mostly delivers and is a strong album you could be forgiven for expecting a little more from Faith No More.

The band garnered a reputation for innovation and pioneering a blend of metal which had a groove and hooks that had never been before. Mike Patton brings an utterly unique vocal presence to anything he’s done. Taking these factors into account Sol Invictus could have been the perfect opportunity to push the envelope and do something truly special. Unfortunately the band never stray far from the tried and tested Faith No More template.

That said it’s a pretty brilliant template! The before mentioned songs standout as being amongst some the best work by the band, while the churning ‘Sunny Side Up’ and the crunching and heavy ‘Cone of Shame’ are instantaneous and really get the blood boiling. Largely speaking the rest of the album grows on you. On first listen ‘Separation Anxiety’ may not be anything special, yet on the third or fourth listen you’ll consider it to be a fine example of the pop-metal sound that is uniquely Faith No More.

‘Rise Of The Fall’ has some lovely guitar work and ‘Matador’ is a real gem in its laid back piano led groove before the track explodes into a classic Faith No More cacophony of drums and sumptuous vocals.

Sol Invictus is an album for the Faith No More aficionado. They aren’t going to bring in many new fans, yet what’s the need to when you can create a record that while safe stands out and shines when compared to other albums released this year.