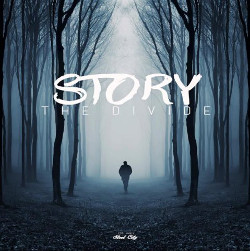 The Divide is the debut EP from Sheffield metal outfit Story. Taking influence from bands like Memphis May Fire and Young Guns as well as their local scene, Story have taken a DIY approach to crafting this EP with heartfelt lyrics and a fusion of melodic hardcore and have managed to pick up a good local fanbase, headlining the city’s O2 Academy and the Corporation as well as chalking up a local support spot for Our Last Night’s tour.

As the title of the EP suggests, The Divide is based around the concept of division and has a five well put together tracks that cover this in one way or another. The EP kicks off with lead single ‘Father Forgotten’ a metalcore blast that makes use of vocalist Bill Hobson’s vocal range, with clean and screamed vocals and the ideal marker to show off what the band can do.

Next we get to ‘Open Your Mind’ a song that ramps up the heaviness on the album with dark brooding drums and guitars, which provide the perfect platform for some of the best vocals on the EP – this is the song that I’ve gone back to the most since I stumbled on this EP. Third track ‘Don’t Get Me Wrong’opens out more like a fusion of Sleeping With Sirens and ADTR taking a more melodic approach to things – and it works well this might be where I’d point someone to start out with this band if I was asked!

‘Wreck’ is an acoustic song, slowing down the momentum of the album but allowing them to showcase what it is that they can do, and changing the tone of the record gives the listener a bit of a breather. Following this, The Divide closes out with ‘Serenity’ which picks up the pace again. It’s a well crafted metalcore song and it is another sign that this band is capable of doing excellent things. Story are a band to keep an eye on, and with a little more practice they could be onto a winning formula.

As a first EP The Divide is a solid starting point and lays down a marker for what they are about – personally I think I like them at their best when they’re at the harder end of the spectrum. Standout track for me is ‘Open Your Mind’ and The Divide gets a solid 7.5/10 from me

For fans of: Memphis May Fire, Sleeping With Sirens, Issues