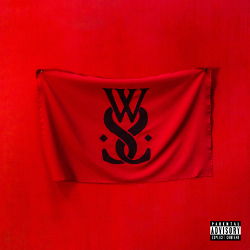 Brainwashed is the latest release and second full studio album, from Sheffield metalcore outfit While She Sleeps. I have to confess in the past I considered WSS to be the try hard younger sibling to fellow Sheffield band Bring Me The Horizon, however Brainwashed stands up on its own as the break out record of the band and a powerful angry war cry of disillusionment. Things have been difficult for the band with frontman Loz Taylor requiring surgery on his vocal chords in order to save his career.

Brainwashed kicks off with the sound of a crowd talking, slowly building up in intensity with ‘The Divide’ before suddenly cutting out only for vocalist Loz Taylor to take centre stage on first track proper ‘New World Torture’. This sets the tone for the record as a whole, lyrics such as “this is a system declining on us” hint towards the frustration the current climate in the country and world at large. From the outset you can see that there has been a leaf taken out of the BMTH book, as the band retain the intensity and fury of a metal outfit, while the songs sound bigger and more polished without losing their edge.

On Brainwashed, there are all the right elements of getting metal right – big vocals that snarl and soar; massive riffs that pack aggression and pounding rhythmic drums that drive everything along. This is present throughout – especially on the trio of ‘We Are Alive At Night” “Our Legacy” and “Four Walls” songs that were released in the build up for this highly anticipated album.

There are a range of tempos and emotions expressed on this record – a key theme of this is dealing with issues and sticking together with those close to you in solidarity – ‘Our Legacy’ a case in point for this. The gang vocal intro to ‘Four Walls’ over subdued guitar is an impressive opening and makes the hairs on the back of your  ‘Torment’ hits the perfect blend of a fierce musical landscape combined with an infectious chorus of “still I’m no better off than I was”. Piano track ‘Kangaezu Ni’ is a slow burning intro into one of the gems of the record ‘Life In Tension’ featuring an awesome riff that needs to be heard – a song that bursts into life from the quietness.

‘Trophies Of Violence’ is a song harking back to the formative days of the band – rage and fury in lyrical and musical form. “Modern Minds” closes the record with a change in pace towards the end, taking an acoustic direction not expected – but doing what this record sets out to do and pushing the boundaries in a new direction.

I have to give Brainwashed 9/10 this is almost metal perfection. A personal highlight for me has to be title track ‘Brainwashed’ as it has the right level of ferocity that makes you want to get down to the front of the pit. Without a doubt, this is While She Sleeps stepping up their game – and has raised the bar extremely high for them.

For Fans Of: Bring Me The Horizon, Architects