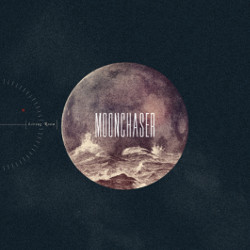 Living Room release their first full length album Moonchaser on the 19th August. Equal parts emo and complex post hardcore, the album has the hallmarks to be something special. The press release that accompanies Moonchaser builds up our hopes, comparing the album to an impressionist painting – ‘their songs contain the same qualities that make the artistic movement so mesmerizing – they’re busy, but precise; blurry, but coherent.’ going on to state that Living Room have ‘mastered a modern musical interpretation of this visual style.’

You couldn’t get any more pretentious and it gives Moonchaser an unfair grandiose expectations. You will hear some excellent songs on the album, ‘The Physics of Intention’, ‘Out of Love’ and ‘About Time’ are perfect examples of when the album lives up to the billing. In these instances and sporadically through the remainder you’ll find Living Room to be an accomplished band and Moonchaser to be a compelling listen.

It’s disappointing then that the rest of the album goes completely against what the press release states. You’ll find several songs blending into one, at times it’s messy with no coherent structure. At other times you’ll find the music washing over you without being able to register any effect. Without the occasional high points you could be forgiven for losing all attention and letting your mind wander.

The fact that you could end up getting through all ten tracks while thinking you were only half way through is testament to how unaffecting the album is. With the emo genre the lyrical content is normally a focal point, but another drawback of Moonchaser being that you don’t even notice the lyrics amongst the chaos and lack of structure.

The album may end on a high with ‘Magnetic Service’ have some excellent riffs and a good structure, but you’re left with a feeling that Living Room have missed a trick. They tried to deliver something special, they tried to inject something into a genre which has a reputation for being based on image and a simplicity to the music. It just didn’t work, a prime example of less being more. Living Room aren’t without potential, they just need to rein it in a bit.