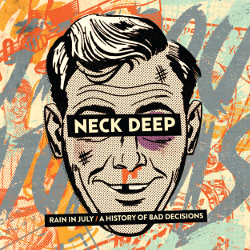 UK pop punks Neck Deep re-release Rain In July / A History Of Bad Decisions next week. Naturally it’s pretty hard to get excited about the re-release of material that’s barely three years old, especially when both EPs which make up the release are still readily available. Why are we covering it then? Well, both EPs were good records and together they make a very decent album.

In the words of the band themselves, “This is more than just a reissue, this is the definitive release of songs that form an important part of our band’s history and of who we still are today. We hope that a lot of our newer fans who have come to the fold out off the back of our album Wishful Thinking will enjoy the chance to check these songs out now that we’ve had a chance to improve how they sound!” explains vocalist Ben Barlow.

That sums it up nicely, essentially the release is to capitalise on their recent success in America. You can’t blame them really. Apparently each track has been remixed and remastered, you’ll need a keen ear to notice any notable difference. It may sound a little cleaner, but it’s not a change that requires a re-release.

Rain In July / A History Of Bad Decisions is full of positives though. As Neck Deep’s merchandise says, it’s generic pop punk. While they may have the slogan embossed on tshirts with an air of tongue in cheek, it hits the nail on the head. It is however generic pop punk done to a very high standard. Each song is instantaneous, undoubtedly they will be going through your head for days after. ‘Silver Linining’ and ‘Up In Smoke’ are great songs, with ‘A Part Of Me’ still being one of the best track s the band has produced.

Founding band members Ben Barlow and Lloyd Roberts credit the massive, unexpected online response to such tracks off Rain In July as the inspiration behind turning what started as a bedroom project into a real band. After recruiting friends and local musicians Matt West, Fil Thorpe-Evans and Dani Washington, Neck Deep’s definitive line up was formed. In 2013, the band self released their second EP, A History Of Bad Decisions.

“It’s been such an amazing whirlwind since then. We’ve written, recorded and released our debut album Wishful Thinking, played sold out shows all over the UK, USA and Australia, we are going to be playing Warped Tour all summer long and we have fans and supporters from all over the world,” says Barlow.

Essentially with this release you get an insight into what made Neck Deep such a popular act. It’s raw, the roots have been exposed and polished a little. An essential release for any Neck Deep fan, for the rest of the world not so much. Have a free download of  ‘Up In Smoke’ below