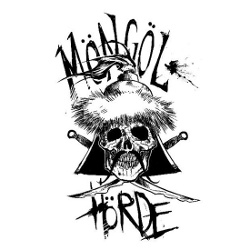 Mongol Horde released their long awaited debut (self titled) album at the start of the week and it’s a visceral hardcore explosion. If you haven’t heard of Mongol Horde before then we’ll get the obligatory “they’re Frank Turner’s hardcore side project” out of the way early on.

They’re a bit more than that though, the project has been milling about in the background for a couple of years. Seen by some as Frank Turner’s blowing off steam compared to the commercialised acoustic punk of his day job; seen by others as a return to Million Dead form or for the really pessimistic his vanity project. One listen of Mongol Horde though and you’ll realised that it’s a brilliant hardcore album, if not one of the best you’ll hear all year.

The other two members of Mongol Horde comprise of Ben Dawson (Turner’s former band mate in Million Dead) and Matt Nasir (of Turner’s current backing band The Sleeping Souls). Musically Mongol Horde are close to that gloriously heavy and discordant sound of Million Dead, albeit with the riffs a couple of notches heavier. Lyrically, Turner abandons the more serious content of his solo work, with songs about returning items to shops, unicorns & zombies, a tapeworm revolution, sailors, time machines and emoticons. Turner himself said, “Lyrically it’s very different from what I do now, it’s kind of depraved”.

‘Make Way’ gets the album of to a gentle start before turning into an all out blistering hardcore track. Turner’s vocal is screeched and harsh, Dawson’s drums pound and drive with venom and as will become apparent throughout the rest of the album Nasir’s guitar playing is of the highest standard. As is to be expected with any hardcore album, the majority of tracks come in at under 3 minutes, each track is a supreme slice of aggressive hardcore. Both ‘Weighed and Found Wanting’ and ‘Tapeworm Uprising’ have some glorious guitar parts. The latter stands out for being a tale about Natalie Portman’s tapeworm escaping and forming their own nation – a fine example of Turner at his lyrical best.

‘Casual Threats From Weekend Hardmen’ is stunningly heavy, the riffs are mind blowingly crushing. The guitar part at 1minute 20 seconds is fantastic. It’s only with ‘The Yurt Locker’ that the album takes a moments rest with frantic fast passed guitars and thundering drumming being the order of the day troughout. ‘Still Unicorn’ is the closest Mongol Horde get to sounding akin to Million Dead – it would have fitting perfectly onto Harmony No Harmony.  ‘Winky Face: The Sign Of A Moron’ is notable for being almost extreme hardcore punk, think Converge with a comment about emoticons.  ‘Your Problem’ follows the same trend, while ‘Blistering Blue Barnacles’ is funny and devastatingly heavy, simply outstanding.

An album of highs, hardcore through and through with witty and fascinating lyrics Mongol Horde is worthy of being more than somebody’s side project. Abandon any preconceptions of Frank Turner’s current material; this is a completely different beast. Don’t take it too seriously, enjoy it. Hardcore at its finest.